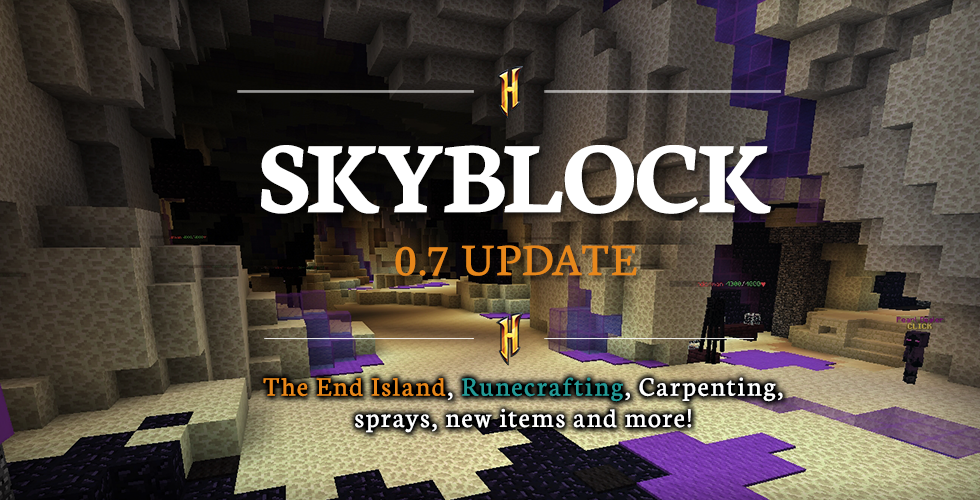 The End island is ready, it is the last Island on this branch of the world. The future combat islands will be in a completely different place.
We are unveiling our monetization system today, we tried our best to make it fun and engaging, let us know what you think!

If you missed our last few patches, you can find them here, and if you missed the 0.6 update, click here. 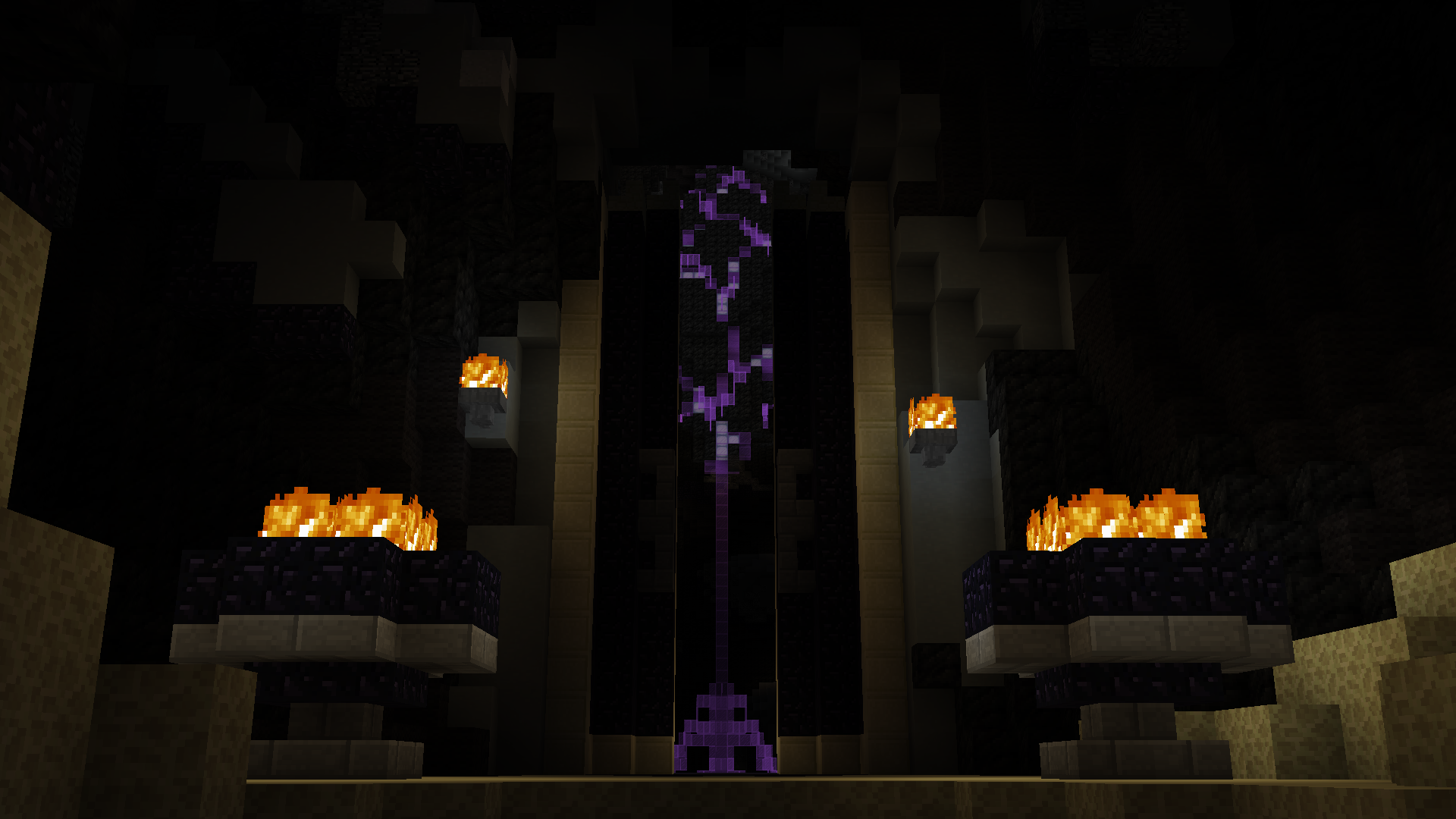 The End Island is located behind the Spider's Den, players need to be Combat level 12 to access it.
This large island made of raw Obsidian and End Stones is a vast desolated land.
Near the entrance, you will find a new shop with unique items, and a strange character that challenges you to a race.
If you venture into the cave you will be able to peacefully mine among the Endermen.
The further you go into the mine, the more diverse and interesting the scenery becomes.

Overall a great place to relax.

That's it! We are not going to give any more details!

Carpentry is a Cosmetic Skill that you can unlock after talking to the owner of the Furniture Shop, in the Village.
Once unlocked, you can start gaining Carpentry EXP when crafting expensive recipes.
Every Level UP will unlock a new Furniture Cosmetic that you can craft using the Carpentry Bench, which you unlock after completing the tutorial quest.

Because Carpentry is purely a Cosmetic Skill, after 3 levels, players will stop gaining Carpentry EXP if they do not own a rank.
Carpentry currently has rewards up to level 10, we will be releasing the level 11 to 25 rewards in the next few weeks.
Some of the Furnitures have special interactions, like being able to place Minions in their chairs, placing armors and weapons in their stands and more.

Exactly like Carpentry, Runecrafting is a new Cosmetic Skill.
Monsters on public islands will now have a very small chance of being Runic Monsters.
Killing those will always drop a Rune, that can be applied to a piece of gear.
You'll have to talk to the new NPC "Dusk" at the back of the Blacksmith, he will teach you about Runes, how to upgrade them and how to apply them on your items.
Killing Runic Monsters, fighting Bosses and crafting/combining Runic items will reward Runecrafting Exp. Each Runecrafting level unlocks at least 1 new Rune, up to level 20.

Runecrafting is a Cosmetic Skill, therefore players will require a rank to level up past level 3.
Also ranked users will gain more and more Runecrafting EXP the higher their rank is.
There are currently 23 different Runes in the game, each can be upgraded up to Tier 3.
Some Runes can only be obtained fighting special mobs or mining special blocks.

Marco the painter is standing in his beautiful house in the Village, next to the Mountain. Marco is a great artist, he will teach you how to paint and unlock a new recipe for you: The Spray Can Once unlocked, the Spray Can can be filled with different colored Dyes. You can then select any of the Sprays your rank unlocks and spray any wall or chest in your island!

The Spray Can is a Cosmetic tool, so players won't be able to talk to Marco if they do not own a rank.

We will be adding more and more Sprays in the future, give us good suggestions!

The Salesman in the SkyBlock Hub changed his outfit and has a large list of Summer Cosmetics to deliver:

Minion Skins are a new Cosmetic Feature we are testing, you can now place Minion Skins inside the menu of minions and it will change their look. In the future we could even give them special voice lines!
Sprays are unlocked permanently in your Spray Can, Minion Skins and Furnitures are limited items.
For example, VIP players will get 1 Sandcastle Furniture, but MVP++ players will get 3.
Ranked players have until September 1st to claim their Cosmetic rewards!

'Perfect Armor
Unlocked in Diamond Collection 9
The Perfect Armor is a Tiered armor, it can be upgraded using multiple Enchanted Diamond Blocks. 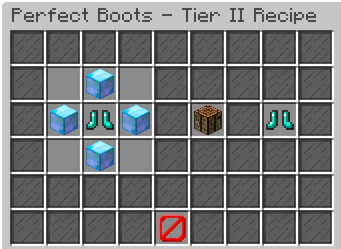 Every Tier upgrades the armor the same way.
There are currently 10 Tiers to this armor.
Upgrading to the next tier will keep all current enchants, reforge and hot potato books on the item.
Spoiler alert: We added 10+ new powerful armor sets in this update. With its 1200 total Defense, this set still ranks as the top 1 or 2 armor set in the game, when maxed out.
Let us know if you think this armor is balanced!

This item was suggested by @noonoodragon in the round 1 suggestion thread.
He is the first winner of the Creative Mind item, more will come!

Emerald Blade
Unlocked in Emerald Collection 8
The Emerald Blade is not that strong of a sword...unless you have a lot of coins on you.
It can eventually become the strongest weapon in the game if you are holding millions of coins.
The bigger the risk, the higher the reward!

Portals to each Foraging Islands
Unlocked in respective Collections
Shortcuts!

New NPC: Rusty
In the last update, we introduced the new enchantment Telekinesis, but most players already crafted a great Pickaxe (or else) and could not add it to their tools.
Rusty (the janitor of the Gold Mines) will add Telekinesis on any of your items for the modest price of 100 Coins!

Crafting Improvements
We have plans to make crafting easier in the future, but until then, here is a new recipe shortcut: 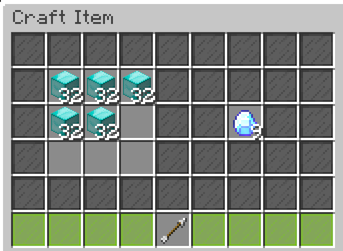 This recipe is available for all ores and Melons. 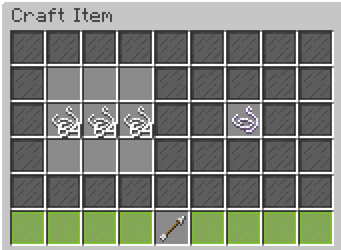 The old recipe is still available. 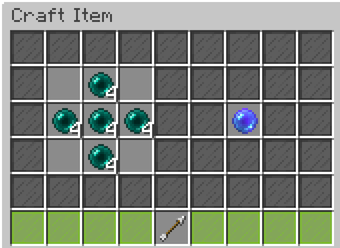 The price of the Enderman Minion upgrades was changed to equal the amount of Ender Pearls it would take until now.

Remove your Hub Portal!
You can now talk to Jerry and get him to remove your Hub portal.
By then you should have unlocked a new trade-in your SkyBlock Menu, which sells a new Hub Portal for 100 Coins.

Also, to combat scamming, from now on for all COMMON and UNCOMMON items:

The talented @ShinkoNet who already won our previous Noteblock Contest has created new Noteblock Tunes and allowed us to use them in SkyBlock!

Ambient Cave is now played in both Gold Mines and Deep Caverns when players enter the cave area.

Due to connection or CPU issues, some players might experience slight audio problems. If you wish to disable the music, you can now use the command /togglemusic or change your SkyBlock settings. Another option is to disable the music by just turning the blocks and noteblock/jukebox sounds off in Minecraft's settings.

Daily Shop Limit
Any item that can be obtained from Minions will now have a daily buy limit of 128 in any shop.
Players can still buy an unlimited amount of dirt or stone for example, but won't be able to unlock all minion upgrades by simply farming 1 collection.

New items in the Builder Shop
All of the new items in this shop can be bought infinitely, except Ice, because it's a collection item.

Thanks for reading!
If you find a bug please report it on the SkyBlock Bug Forums

A note on "Weekly updates"
While the 0.5 and 0.6 updates put a lot of pressure on our shoulders to keep delivering large updates as fast as possible, some projects are incompatible with weekly updates.
Making a new island, for example, requires a lot of planning ahead of time, then the building and development process takes already more than a week. Once the testing phase starts, we start finding bugs, design improvements, but also new ideas.
We still want to release weekly, but if we are working on larger projects we will either release much smaller updates until the bigger projects are completed, or won't release anything if we consider the update to be too small.

That being said, we started working on the next Island. It is a project more ambitious than The End, so we might release the island in multiple parts.
There are 2 other large SkyBlock projects we started working on, which will also take multiple weeks to complete.
In the meantime, we will keep releasing the rest of the Cosmetics we are working on, and QoL improvements.
Our goal is to release at least 1 large update during August. Stay tuned!